One of the most intriguing art movements to emerge in the twentieth century is Surrealism. It encompassed visual arts, literature, film, and philosophy, requiring its artists to use the unconscious mind as a well for creativity. The biggest name in Surrealism is Salvador Dali, however, it is writer and filmmaker Andre Breton who led the group and wrote the Surrealist Manifesto in 1924. Dali was eventually kicked out of the group.

Creating works of art sourced from the unconscious mind sounds like one has to travel across hasty terrain. But, in short, what was asked of the Surrealists was that they open themselves to artistic expression by liberating the mind from logic. Automatic drawing or writing acted as a vital tool for many artists to discover what is lurking in the unconscious and perhaps even discover psychological tensions. The Surrealists have also looked to mysticism, ancient culture, and Indigenous art for sources of inspiration. This has resulted in Surrealists’ artworks having characteristics of dream-like scenes and unexpected juxtapositions, where ordinary objects are composed in an unconventional way to elicit meaning.

The leader of the Surrealist group, Andre Breton, who, besides being a writer and a critic, had trained as a psychiatrist, defined Surrealism as “a pure psychic automatism, by which one proposes to express, either verbally, in writing, or by any other manner, the real functioning of thought. Dictation of thought in the absence of all control exercised by reason, outside of all aesthetic and moral preoccupation.”

The Treachery of Images (1928) Renee Magritte

Underneath a realistic smoker’s pipe is the sentence ‘This is not a pipe’. While we, the spectator, can see perfectly well that what Renee Magritte has painted in The Treachery of Images is a pipe, his statement that the image painted isn’t a pipe points towards a discord between language and meaning. In short, words aren’t representational of an object. Magritte doubles down on the idea: “The famous pipe. How people reproached me for it! And yet, could you stuff my pipe? No, it's just a representation, is it not? So, if I had written on my picture "This is a pipe", I'd have been lying!” Indeed, this image of a pipe cannot be filled with tobacco, and spectators were left to question their reality. Magritte was putting words on paintings before Barbara Kruger came long and ran with the idea. This hadn’t been done before and was a revolutionary moment in art.

There is nothing redemptive and organic in Kay Sage’s I Saw Three Cities. She creates a beautifully eerie atmosphere with geometrical shapes scattered across the deserted ground. The world she has painted is a nihilistic one, it’s impenetrable, it’s hollow. I Saw Three Cities was created after the Allied win in World War Two. The sole figure in the image evokes the Hellenistic statue Winged Victory of Samothrace (190 BC), which depicts the Greek Goddess of victory, Nike. Like the other Surrealists, Sage was interested in automatons and mechanical devices that imitate humans, so the figure in the painting may not represent Nike at all.

Ten years before Andre Breton wrote the Surrealist Manifesto, Italian artist Giorgio de Chirico was creating paintings that evoked those ideals. One of those paintings is The Song of Love, which features a giant surgical glove, the head of a classical sculpture, and a rubber ball, all in a town or city that looks eerily vacated. To be sure, there’s a haunting human presence in the fleshy pink glove. These items create a sense of mystery that touches on the elements of Surrealism, and his work would go on to radically inspire the group.

The Persistence of Memory (1931) Salvador Dali 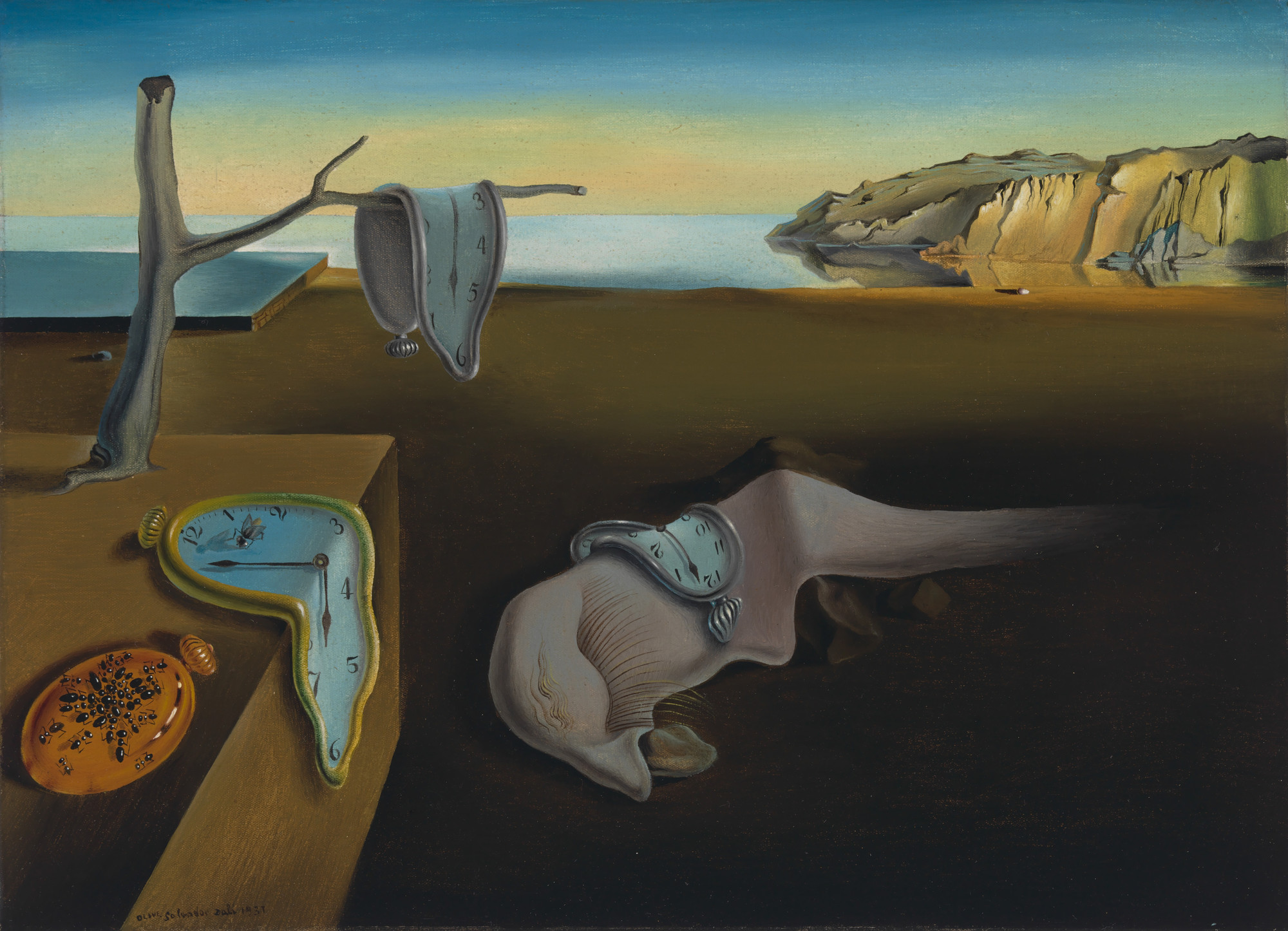 Perhaps the single-handed most famous artwork of the Surrealists is Salvador Dali’s The Persistence of Memory. In the painting, a series of pocket watches have melted and become limp in a barren landscape. Time loses all meaning. Dali deliberately depicted an olive tree in the foreground, with its branches and leaves cut, preventing it from flowering and producing anything edible. In the background, the light comes from the twiligAht and, in Dali’s words, this is a melancholy light. There are ants scattered across the surface of one watch, symbolising a decaying body festered with ants. On the ground lays Dali’s profile, with his eyes closed and long eyelashes look like the long legs of a long-legged spider. 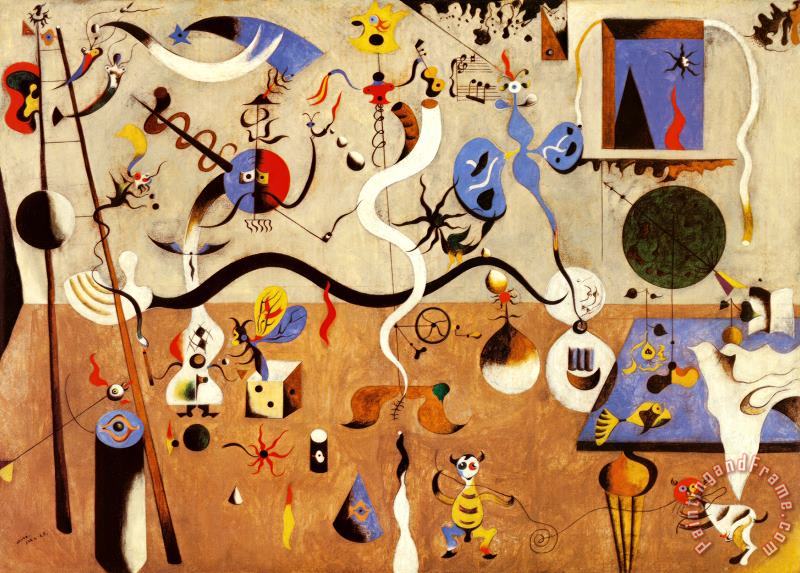 Jan Miro’s Harlequin’s Carnival comes from hunger. That is, Miro was inspired to create the painting after struggling economically and failing to eat proper meals. This hardship turned into a masterful painting that became a major work of the Surrealist movement and was exhibited in the “Surrealist Painting” group exhibition in 1925. Miro states, “I didn’t depict what I’d see in my dreams, as the Surrealist often did, but what hunger would produce: a form of trance.” Harlequin’s Carnival depicts a whacky carnival taking place indoors, where the scene is lively, entrancing, and a little bit maddening. 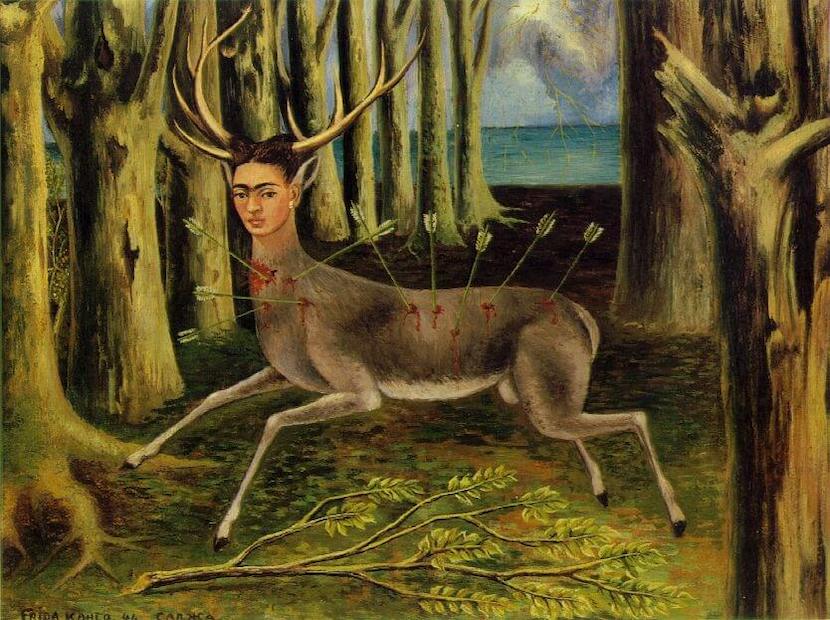 Frida Kahlo is best known for her stark and stunning self-portraits, of which The Wounded Deer is one. The painting is an unusual self-portrait, showing Kahlo’s head on the body of a young deer, her pet Granizo. Several arrows have also been shot into the deer’s body, implying it is Kahlo who is wounded and bleeding. When Kahlo painted The Wounded Deer, her health had been deteriorating. Her health had been on a constant roller-coaster ever since she suffered from an accident on a bus, leaving her with severe long-term damage to her spine, pelvis, ribs, leg, and abdomen. Using the Surrealistic characteristics of placing ordinary objects beside unordinary ones, Kahlo expresses herself without the use of realistic painting conventions. Although Kahlo never considered herself as a Surrealist, saying, “They thought I was a Surrealist, but I wasn't. I never painted dreams. I painted my own reality.” 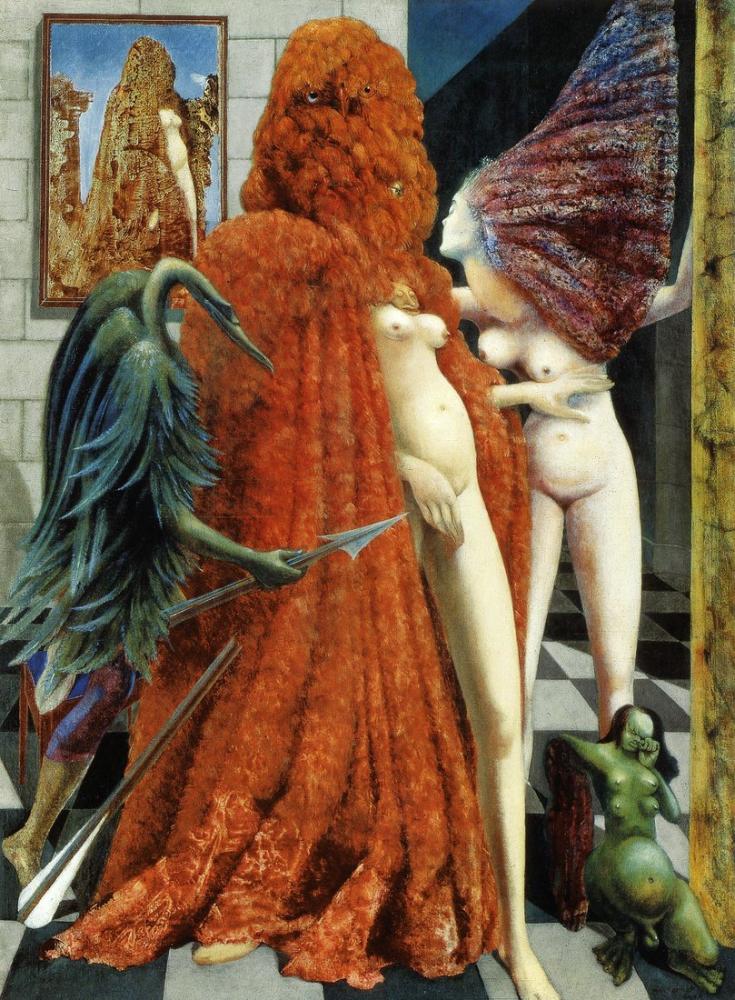 The dominating red in The Robing of the Bride will no doubt attract you from a distance. Once you see what is actually being depicted, it may shock you a little. The four figures in the painting are in a room that looks like something out of medieval times. The person in red is a woman who is assumed to be the bride, except the headdress she wears makes it seem as though she is a bird rather than human. She’s being threatened by the spear in the hands of a green bird with human limbs. Then there’s another woman wearing a purple headdress, and by her feet stands a monstrous creature. On a wall behind them is a picture depicting the same scene, except this one has a clear blue sky. It’s a painting filled with Surrealistic contradictions.

In Leonora Carrington’s Self-Portrait, she likens herself to a hyena. It’s not as on the nose as this, rather, it seems that Carrington feels herself relating to the hyena’s rebellious nature. This is probably because, despite being rejected by the Surrealists, consisting of males who apparently preferred to see women as objects of desire rather than artists themselves, Carrington saw herself as a rebellious being. The horses in the painting, of which there are two (one hanging on the wall inside, and the other sprinting outside in the garden), symbolise freedom and liberty. It’s an animal that has featured in much of Carrington’s work thanks to her interest in Celtic mythology. Whatever her relationship was with the Surrealists, she had a confidante in Max Ernst, who took Self-Portrait to New York with him when Carrington left the painting with him in WWII Germany.

Should Graffiti be Considered Art?