Modern wall art is a period of art that begins in the 1860s and ends around the 1970s. It emerged during the Industrial Revolution, where parts of the world, namely Europe and the United States, saw advancements in technology, manufacturing, and transportation. The effect of these advancements in these countries was great and altered the social, cultural, and economic aspects of life.

Before the Industrial Revolution, artists relied solely on wealthy benefactors or the Church to fund their work. The artworks were thus limited to portraiture or of Church iconography. The Industrial Revolution opened doors for artists to look within themselves for inspiration. Going from objective art to subject art, it opened doors for new types of art. Some of the most prominent movements from the Modern art period is Abstract, Surrealism, and Impressionism.

One of the Modern art characteristics include expressive use of colour. Before the modern artists, the Realists preferred a refine palette, fixated on depicting reality. Artists like Claude Monet, Mark Rothko, and Wassily Kandinsky toss these rules out the window with the radical use of colour. Another characteristic is a rejection of history. As mentioned earlier, the history of the Church was a subject many artists were compelled to cover for their clients. Other subjects included mythology and moments in history. But the reality was changing. The working class had more leisure time, they were moving to the cities to work in factories, they were earning a wage. Transportation was also advancing, and people were spending these leisure times in the country and artists like Edouard Manet, Auguste Renoir and Berthe Morisot were capturing the daily lives of ordinary people in amazing ways.

What better time to put aside these subject matters and depict the changing reality? Let’s take a look at 5 famous modern art pieces. One of the most famous modern art pieces of the twentieth century is Pablo Picasso’s Les Demoiselle d’Avignon. It had a profound affect on the art world and acted as one of the key artworks that helped develop Cubism. Picasso was twenty-five years old when he painted Les Demoiselle d’Avignon. It's a scene that depicts five nude women from Avignon, a street infamous for its brothels in Barcelona. These women raised eyebrows as they were from a scene that not many Europeans were exposed to in art. These women are coloured in a peach shade and stand amongst silver and blue drapes. There’s some fruit in front of the women, melons and grapes evoking the exotic. Picasso had clearly been interested in the exotic as two of the women also wear African masks, something he had been collecting for several years. There was nothing like Les Demoiselle d’Avignon in European art and it caused a scandal. It remains as one of Picasso's most beloved and influential artworks to this day. 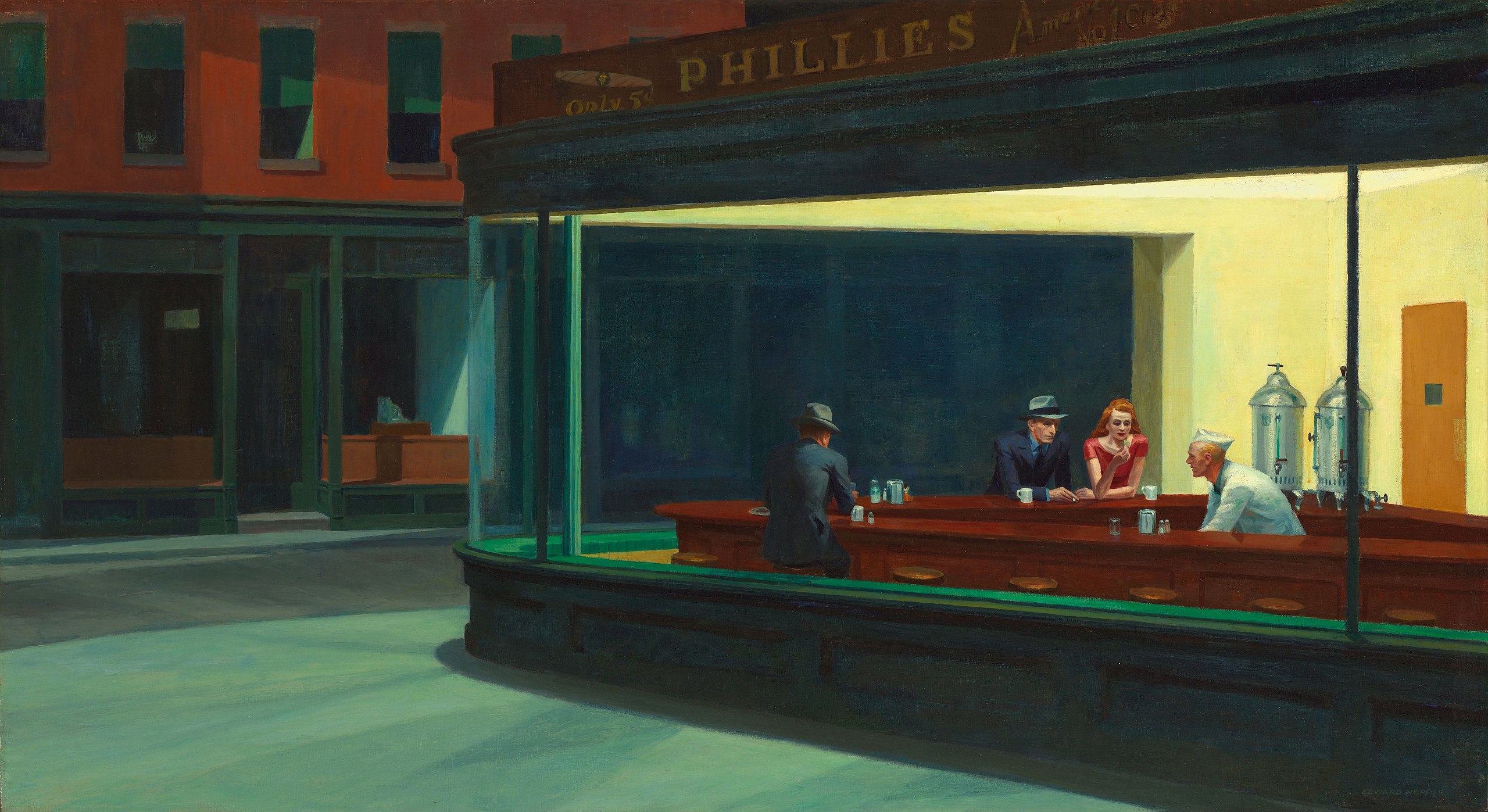 Edward Hopper, America’s most prominent painter in the movement of American realism, painted a scene of a diner that is both eerie and melancholic. Hopper’s 1942 painting Nighthawks is perhaps his most famous modern art piece, and easily recognised as being one of America's most prominent artworks of the twentieth century. Hopper was a prolific painter and painting in the theme of realism. His subject matter ranged from rural scenes to urban scenes, where Nighthawks takes place. The diner is located in Greenwich Village. It’s an iconic painting of modern American life.

Ever on the outskirts of society, Vincent van Gogh is the perfect example of an artist who rejected the traditions of art and followed his own path. This came at a cost as his beautiful artworks went unappreciated by society during his life. However, van Gogh has had the last laugh by becoming one of the most famous artists of all time thanks to following his instincts and painting what he found was beautiful and impactful. Starry Night is one of the many famous paintings van Gogh created. Starry Night is a unique landscape painting, showing the town of Saint-Remy, located in the South of France. The painting depicts a starry night view from van Gogh’s window from the Saint-Paul asylum, where he had admitted himself while struggling with mental illness. The vibrant colours and quick brushstrokes have Starry Night stand apart from the traditional artworks of the past and is one of the famous modern art paintings to exist. The Norwegian artist Edvard Munch was associated with the German art movement Expressionism. The Expressionists intended to express and depict emotional experiences rather than physical reality. The Scream expresses the emotional experience Munch had felt: a sense of crippling anxiety. It seems the subject of psychology was a natural one for Munch to depict. Having come from a family that suffered from severe mental illness, Munch depicted his most inner dark thoughts. The Scream was inspired by a moment Munch had walking down a path, with the city on one side of his and the fjord on the other. The tired Much stopped and surveyed the view. Then, Munch recounts, “I sensed a scream passing through nature; it seemed to me that I heard the scream. I painted this picture, painted the clouds as actual blood. The colour shrieked. This became The Scream." The blood-red sky was to Munch a “scream of nature”. The Scream was one of many paintings in Munch’s body of work that expresses his psychological state, from suicidal thoughts and pessimism to violent behaviour and his bouts with alcoholism. Although haunting and terrifying, it is one of the western world's most famous modern art pieces. Melting watches akin to camembert cheese? In the world of Salvador Dali, sure, why not? The Persistence of Memory, one of the many of Salvador Dali’s artworks, will have you raising your eyebrows. There are many features of the painting that can easily be missed. Take a look at the ants swarming one melted watch, showing the decay of time. Then, in the distance, a body of water acting as a respite against the desert. Seen on the ground is Dali’s likeness, his face, melting across the floor. The melting watches depict as the human mind moves from the softness of sleep to the hardness of reality. While The Persistence of Memory shows us many things and there are some conclusions we can draw from it, Dali had never explained the meaning behind the artwork. In another painting featuring melting watches, Dali paints the Disintegration of the Persistence of Memory (1954), which deconstructs The Persistence of Memory, one of the most modern famous art pieces known today.